You can tell when someone’s walked the journey for real.   Barbara Taylor’s been there.  If you’ve lived through any of these yourself, you’ll feel them all over again as she describes her experiences.  Right now I’m flashing back to opening the audit letter from the IRS. . . .shudder.  Reprinted with permission.  Original article appears here. 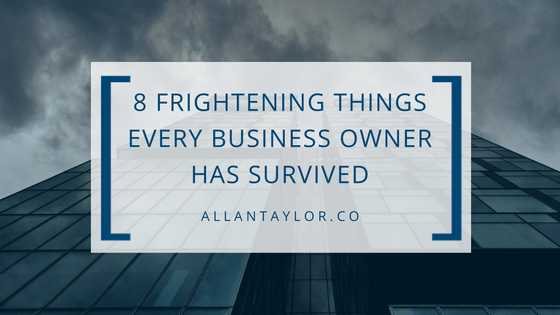 Owning a business comes with several rites of passage. Some milestones arrive with a sense of pride and euphoria. It feels amazing to land your first big customer, break a sales record, earn recognition in your industry or the press. During these moments you’re on top of the world, shouting down the skeptics, “I was right! I can do this!”

Then there are the other moments.

They make you wish you’d never embarked on this crazy journey in the first place. Some of these moments are suffered in lonely, anguished silence. Others are on display for the world to see. During the bad times you just want to crawl under a rock and escape the patronizing looks from the people who told you you were nuts to start your own business anyway.

If you talk to enough seasoned entrepreneurs, you’ll find that most of us have lived through at least one of the same walking nightmares. Like those recurring dream archetypes — freefalling through the air, teeth crumbling, being naked in public — here are eight frightening things every business owner has survived:

I don’t think I’ve met a single entrepreneur who hasn’t paid themselves last — or not at all — for some period of time. At its most basic level, entrepreneurship is often a chance to be your own boss, allowing you control over your time and your paycheck. But it can be a long, hard slog to get a business up and running to the point that it can afford to pay you a good salary with benefits. Along the way there are typically at least a few times when you go without so that your employees and your business have full pockets, even though you don’t.

Running out of cash

Unlike the nightmare of not being able to pay yourself, something only you and your long-suffering spouse may know about, running out of cash can be an obvious problem. Chris and I have met several business owners over the years who visit our office — hair on fire, anxiety palpable — wondering if they can sell before they run out of cash.

This is a DEFCON 5 nightmare that is typically accompanied by many sleepless nights. It can be a frantic race against time. Some business owners resolve the problem by using personal funds to keep the business afloat, begging for new terms with suppliers or getting a quick capital injection from friends and family.

Regardless of how you get over this hump, you vow to master your cash flow and never repeat this nightmare again.

Opening a nasty letter from the IRS

I tell every business owner I know not to handle their own payroll. Here’s why:

When we owned a business we sold back in 2006, I was doing payroll for about 20 employees. I thought I was doing a swell job. Then I got a letter from the IRS threatening to take everything I owned, after which they would decide whether or not to put me in jail. I was confused and terrified to say the least. I didn’t even know what I’d done wrong.

What I’d done was fail to realize that we had reached the point where we were supposed to be filing payroll withholding monthly instead of quarterly. To make a long story short, I spoke with a very friendly agent at the IRS (clearly not the author of the letter) who helped me figure out how to pay properly and get current.

This was an obvious case of “you don’t know what you don’t know.” Here’s a tip: If something in your business involves the IRS, pay someone else to handle it.

This is another nightmare I had to live through myself. Chris and I spent the better part of six years fighting a frivolous lawsuit (it did not involve a transaction or a client, by the way). The plaintiff eventually ran out of appeals and other mechanisms for prolonging the agony. In the end, nobody won. We were out a pile of money, and he was out an even bigger pile. As someone once told me, the only people who win in litigation are the attorneys.

I hope you never get sued, but there’s a good chance you will if you build a successful, profitable business. If you don’t think you have the stomach to fight a lawsuit, think long and hard about becoming an entrepreneur.

Someone steals from you

You know it’s happening. You can feel it in your bones. Something is off but you can’t put your finger on it.

Someone is stealing from you!

Rejected for a loan

There are plenty of good reasons for needing to raise a little debt for your business. You may want to introduce a new product or service, hire some additional employees or purchase new equipment. Whether it’s a short-term bridge or a long-term investment, there will be times when you’d prefer to conserve cash and use debt to get from point A to point B at your business.

Even with years of profitability and a healthy balance sheet, banks are notoriously conservative when it comes to working with small businesses — especially since the financial collapse of 2008.

If you haven’t felt the cool wind blowing in your face at your bank’s commercial lending department, consider yourself lucky. In one of the many strange ironies of entrepreneurship, the best time to borrow money is when you don’t need it.

Aside from #2 above, this hallmark of entrepreneurship is probably the biggest contributor to sleepless nights. Entrepreneurs are risk takers; although not necessarily like the reckless gamblers we look like to the casual observer. No, we tend to take risks based on the confidence we have in our own abilities.

That’s why a crisis of confidence can be such a blow to an entrepreneur. Did you pick a bad location for your distribution center? Is that new hire you championed really a charlatan? Did you read the market or your customers’ needs wrong?

Business ownership is a constant ebb and flow of “nailed it” followed by “continuous improvement.” If you’re a seasoned entrepreneur you’ve learned that you can’t win ‘em all, but that’s not a referendum on your overall ability. See where the chips fall, then either celebrate or learn from your mistakes and move on.

The life of an entrepreneur is a lonely one. In the beginning there will be no shortage of naysayers. Some people opt out of your life early, based entirely on the fact that you’ve decided to throw convention out the window and do your own thing. Your ambition can seem like a reckless betrayal of both normalcy and their own expectations for how you should live your life.

During the down times there will be people close to you who are quick to say “I told you so.” When times are good, rather than help you rejoice some “friends” exude a chilly sense of resentment. The sting is even more severe when longtime friends — and even family — begin to treat you differently because of the choice you’ve made to own your own business.

Peer advisory groups like Vistage and YEC can be an invaluable resource for support. If you can’t find a group, you can always start one. Chris started the Apex Group of Northwest Arkansas for this very reason. We’ve been leaning on each other — and learning from each other — for more than five years now.

Some wise person once said that when you become successful you will “make many false friends and true enemies.” (See #4 above.) It’s just one more frightening experience that goes with the territory.

Entrepreneurship is a club. Join us if you dare.

Barbara is co-founder of Allan Taylor & Co. and a former New York Times blogger. She has been a small-business owner since 2003. Barbara lives with her husband, Chris, and their two sons in Northwest Arkansas.

This article originally appeared at: https://www.allantaylor.co/8-frightening-things-every-business-owner-has-survived/.